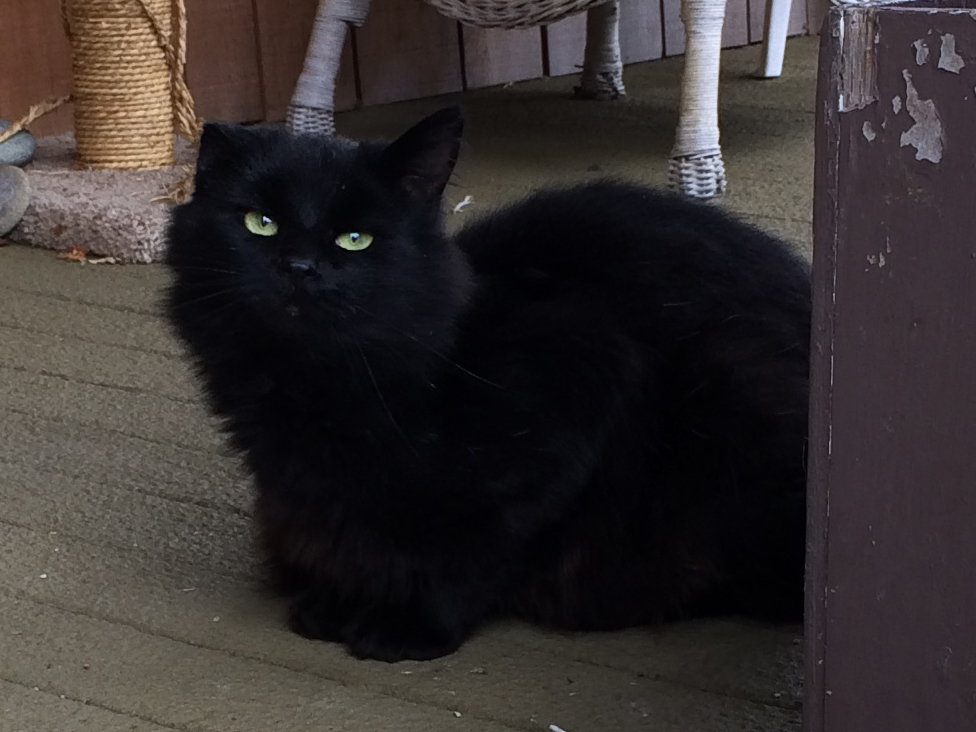 This past summer a little stray black cat with medium long fur and a fluffy tail started hanging out in our neighborhood.  Our neighbor across the street felt sorry for him and started feeding him. He was very skittish and only let her occasionally pet him when he was eating. Our plan was to help her catch him and bring him to the local PAWS shelter. Then she had some health issues and had to be hospitalized for an extended period of time. While she was in the hospital, we helped out feeding her two cats and also the stray black cat.  He eventually let us pet him, but only while he was eating. We still thought we could bring him to PAWS, but when they found out he wasn’t socialized and we couldn’t pick him up, they said he would not be a good candidate for adoption and they couldn’t take him.  They suggested we get him neutered at a Spay & Neuter clinic located 80 miles north of us, then release him back into our neighborhood afterwards.  The clinic has a shuttle bus that visits our area once a month…so we had him booked on the October 30th shuttle.  He didn’t show up that morning and even if he had, we probably couldn’t have caught him.

We then contacted a person we know with a local animal rescue organization.  They set up an appointment for him with a local vet.  They paid for his neutering and we covered all of his shots and exam.  The afternoon we were supposed to bring him in we caught him in a humane trap and he flipped out!  We brought him to the vet and told them he was pretty scared.  When they tried to get him out for his pre-surgery prep the following day, he went berserk and about took the tech’s nose off.  They managed to corral him and cancelled his surgery until the next day when he would be the only cat on the schedule – it was all hands on deck.  His surgery went well and he was negative for all of the feline diseases. The vet said that his floppy right ear must have been injured at some point and will probably always be that way.  They estimated his age to be two, but he seems more like an older kitten to us (maybe 1 year old?) because he doesn’t weigh very much for a male cat (8 lbs) and he LOVES to play.

Back to our story – our neighbor’s husband agreed to set up a temporary “room” for him in his garage while he recovered from surgery and we worked on finding him a permanent home.  That was a couple of months ago – since then we have been feeding him every morning and evening…and playing with him (he’s a professional Da Bird hunter!). We can now pick him up and hold him – every time we visit with him, he greets us with happy high pitched chirps and head butts. Our original plan to find him a home, or possibly get him a gig as a barn cat, has gone down in flames – we’ve fallen in love with the little guy and he feels the same about us.  So, the new plan is to integrate him into our two-cat household.  Getting ready for WWIII…. Kirby playing in the garage (his temporary headquarters)